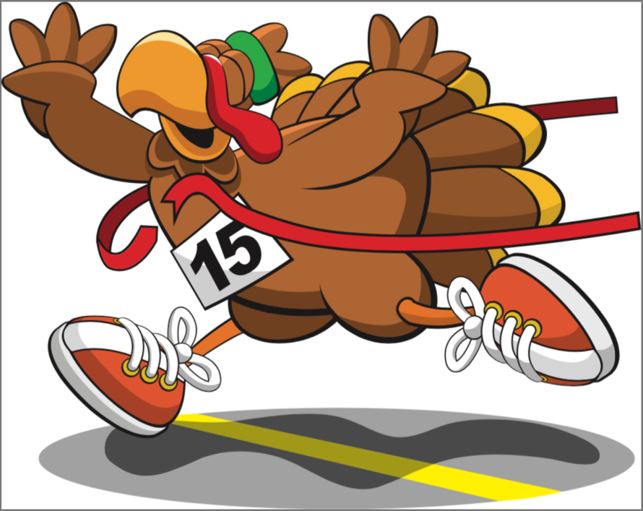 The location for this year's Turkey Trot is Lynnfield High School

Organized by:
No surprise fees - what you see is what you pay.

Twelve years of tradition, lots of contributions to local charities and scholarships given, and one heck of a great time for you and your family. It begins and ends at Lynnfield High School.

We are doing a fun run for kids aged 12 and under, which will be one loop around the Lynnfield High School entrance/exit and will allow for an easier level of participation. Fun runners will receive a medal.

Shirts are given to all registered 5k runners.

Male and Female Winners in groups 1-6

Finisher Medals: All 5K and Fun Run runners will receive the cool medal shown below.

About the Rotary Club:

The name Rotary came from the early practice of “rotating” meetings between the offices of the few members.  Rotary Clubs, especially in New England, have become more and more involved in road race events as a means of fundraising for their charitable causes.

The Lynnfield Rotary Club was chartered in 1963 by John Kimball and Kenneth Worthen and is part of Rotary International.  The club provides scholarships and donates to charitable causes locally and around the world.  Internationally there are 1.3 million members with representation in more than 160 countries with over 30,000 clubs on six continents.  Since their founding in 1905 they have been dedicated to world peace and to helping those in need.  It was the world’s first service club.  They were involved in the formation of the United Nations and remain dedicated to that body today, especially with their support of UNESCO.

Proceeds from the Lynnfield Rotary 5K Turkey Trot directly fund three $2,000 "Service Above Self" Scholarships to Lynnfield High School Seniors who are anonymously selected based on essays they write documenting their community service. Few organizations can match Rotary for charitable giving and community involvement.

About the Town of Lynnfield:

Lynnfield is living history.  In many ways, it has not changed in nearly 300 years.  Throughout the village, on every road and lane on adjourning farms, there is a palpable sense of history and tradition.  It was once two distinct villages; Lynnfield Center was mostly an agricultural town, and Lynnfield Crossing was more of a commercial location.

Lynnfield was settled in 1638, and chartered/incorporated in 1814.  It sat on the “Newburyport Turnpike”, which was the main stagecoach road from Boston to Portsmouth.  Subsequently that general route became US Route 1.  Both I95 and route 128 go through town making it very easy to get to today.

The Ipswich River serves as the northern boundary, and Lynn Woods Reservation is partially within the town on the southwest corner.  H.P. Hood Dairy’s corporate headquarters is in Lynnfield, and it has been home to many, many Boston Red Sox players and Boston Bruins as well, including Carl Yastrzemski, Pedro Martinez, Rico Petrocelli, Mike Millbury, Don Sweeney, Steve Kasper, and others.

In Lynnfield there is a sense of small town America as it once was, and as it should be—with open space, ample opportunities for outdoor recreation and thoughtful planning.