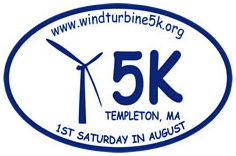 Flat, fast course with scenic views of Mt. Monadnock. Race finishes with a downhill sprint toward the school's track. Runners complete almost one full lap as they finish at the base of our 400 foot tall 1.75 megawatt wind turbine. Walkers welcome!

Past Results
Start List
Organized by:
No surprise fees - what you see is what you pay.

Due to a small amount of participants since the 1980 season they have become; at best, a middle of the pack team to a point that fielding a full team at times had been a task. Four years ago the participation became low enough that conversations were that the program might be dropped.

Why the distance, course and name? The 5K distance was chosen because it is an attainable goal for most fit people in the age group (30- 45 yrs.) to run or walk. This age group would have children in or entering middle or high school. Our hope is that their children will become interested in running, enter the race and join the Cross Country team.

The course is believed to be the flattest 5K loop in the Town of Templeton, thus easy to run and fast for those that choose to do so. The race finishes in front of the Templeton’s Wind Turbine just to the side of the High School running track, hence the name. John LeClerc’s name was added just before our second race. See related article from the Worcester Sunday Telegram dated July 17, 2011.